My Royal Jordanian Airline experience began in the center of the Midwest. For those geographers out there, congratulations! You’re correct, that’s in the center of America. More specifically, in Chicago. My interest in the Middle East has grown a lot recently so I decided to make a trip to Jordan. I feel like westerners tend to think that all of the Middle East is dangerous when in fact there are very safe places to visit such as Jordan. Basically, Jordan is the Switzerland of the region. I’m interested in places that are off the beaten path. They have a lot to offer as a country and a lot of it was a mystery to me so I’m intrigued!

Click HERE to get the best deal for your Royal Jordanian flight! 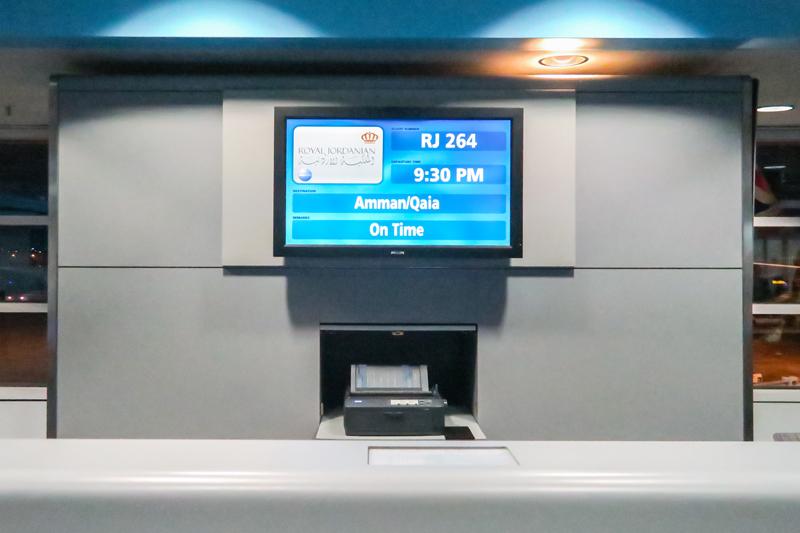 It was only right that I would fly to Jordan business class with Royal Jordanian Airlines! My flight was in the evening at 9:30 pm. Normally, I wouldn’t go to the airport super early but I wanted to check out the business lounge which you can read about in a separate article. Checking-in was a breeze and before I knew it I was in the first class line for security. After stuffing my face for an hour or so in the lounge it was time to board the aircraft. Obviously, Pierre was first to board! My seat was 1k which was the absolute front of the plane. What a great seat! 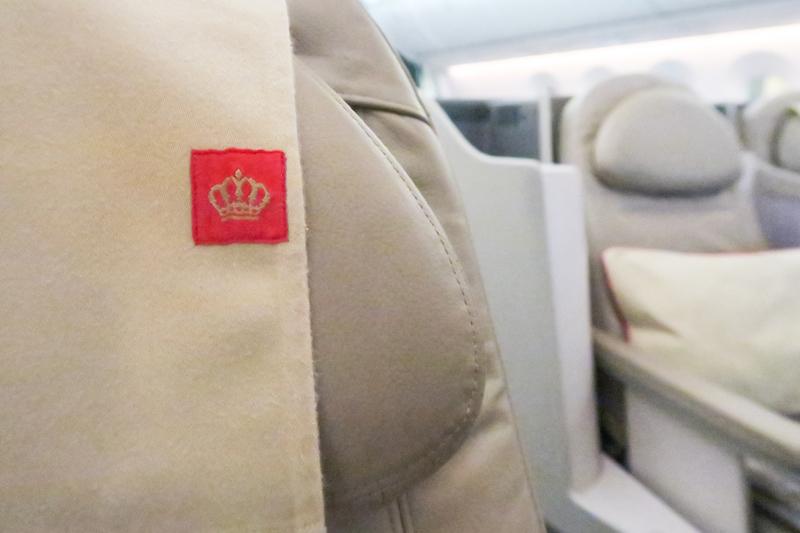 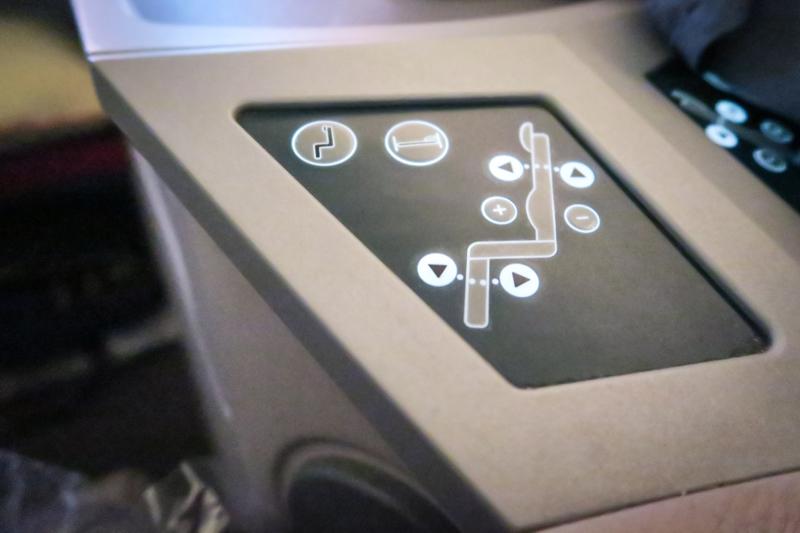 Just getting acquainted with the functions of seat was a delight. On a 11+ hour flight you definitely want the ability to lay all the way down. Strange enough I was actually seated next to someone who lived not far from my hometown. We had a great conversation on the way but I can’t share it because it’s top secret! Thanks to the schedule of the flight, I was able to get a full night’s sleep, enjoy myself on the plane and wake up full of energy in the late afternoon in Amman. 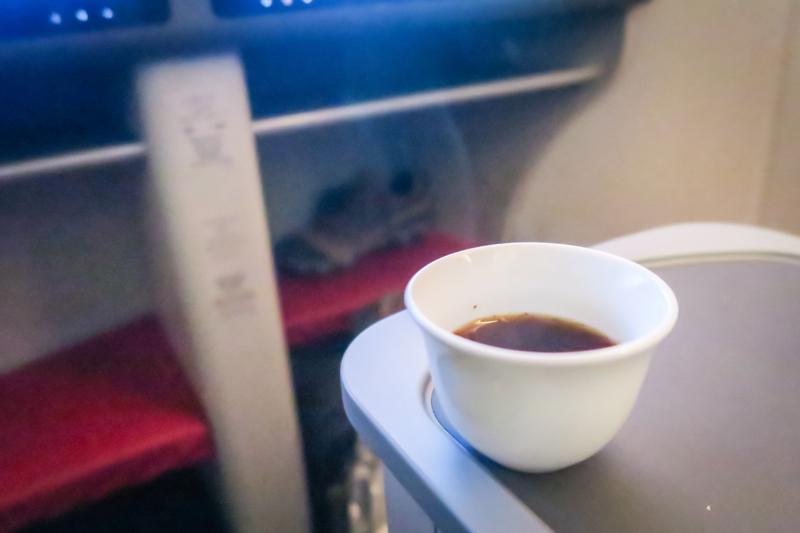 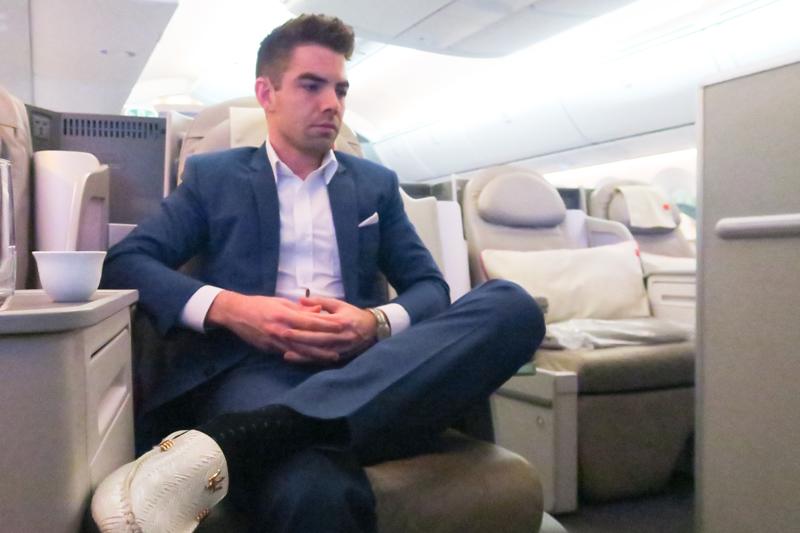 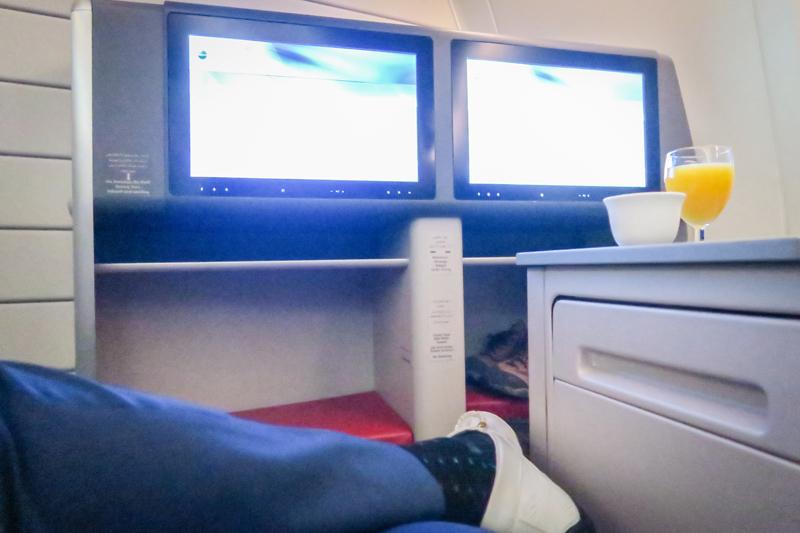 Now let’s talk about the main event, the service, the food and the plane’s features. Soon after I boarded the plane I was offered an Arabic coffee. They already knew the key to my heart! I must say that the flight attendant that took personal care of me was just perfect and not to mention absolutely beautiful. Every interaction we had she had a big smile on! I’m sure it was only when she talked to me. Wink. 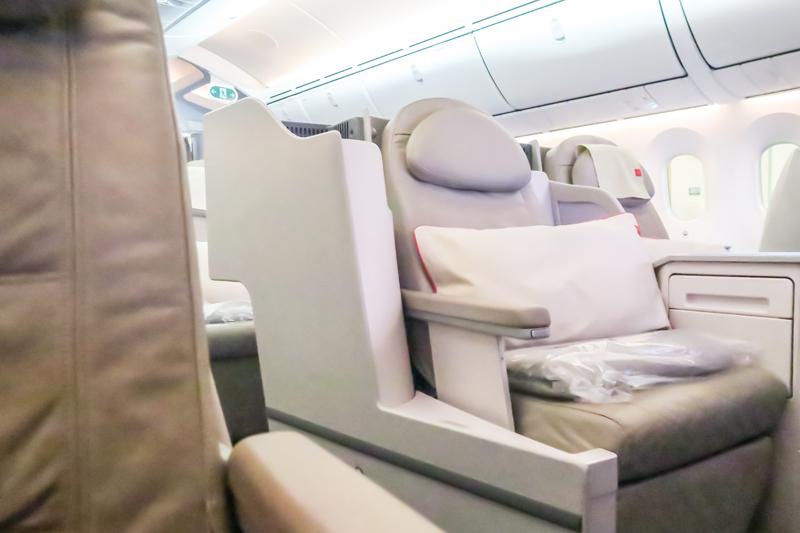 The seats in the first class cabin were very comfortable. You could easily adjust the foot rest and back of the seat to reach your optimal position and eventually lay down while sleep and count sheep. 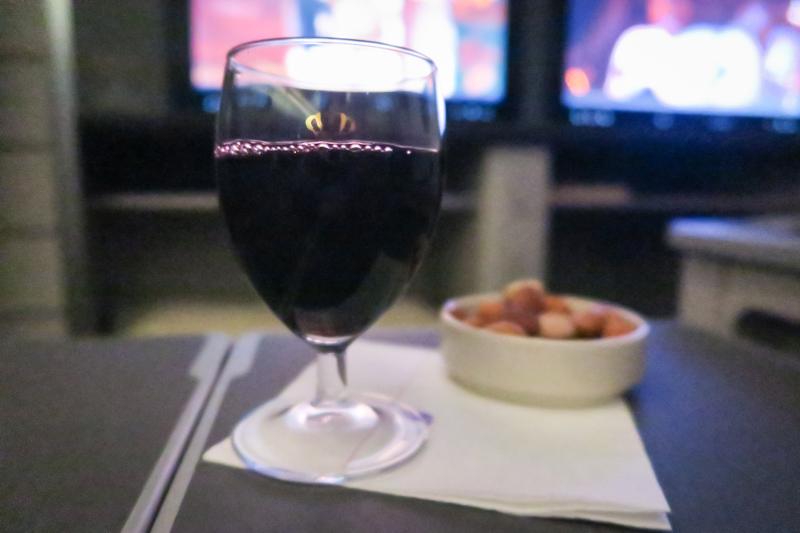 Pierre was comfortable and ready for take off. Shortly after we were airborne it was time for the first round of food and drinks. The first course was mixed nuts along with a beverage of my choice. I chose a Shiraz from Jordan which was quite nice! 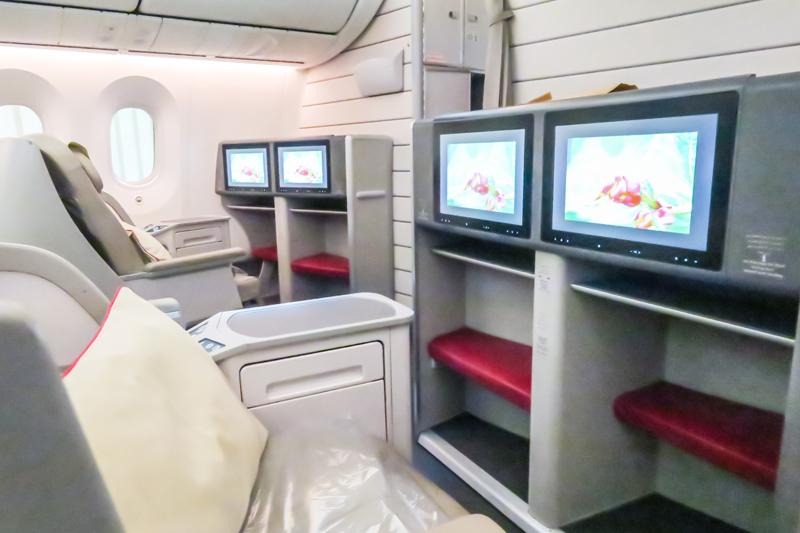 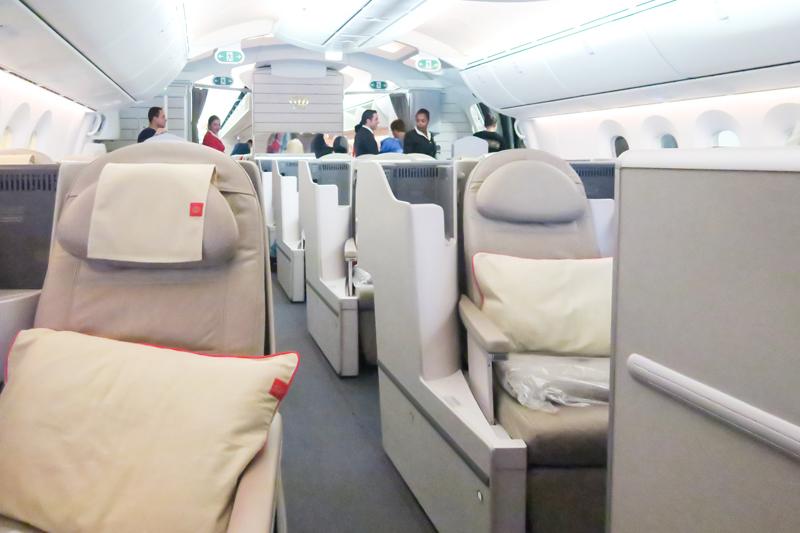 It was then time to settle in a for a bit and watch some of the in-flight entertainment. I must say that I was satisfied with their choices of movies and TV shows. They had a wide variety of brand-new and classic movie titles. I’ve heard a lot of good things about one of them so I started off the flight with the movie Brooklyn. 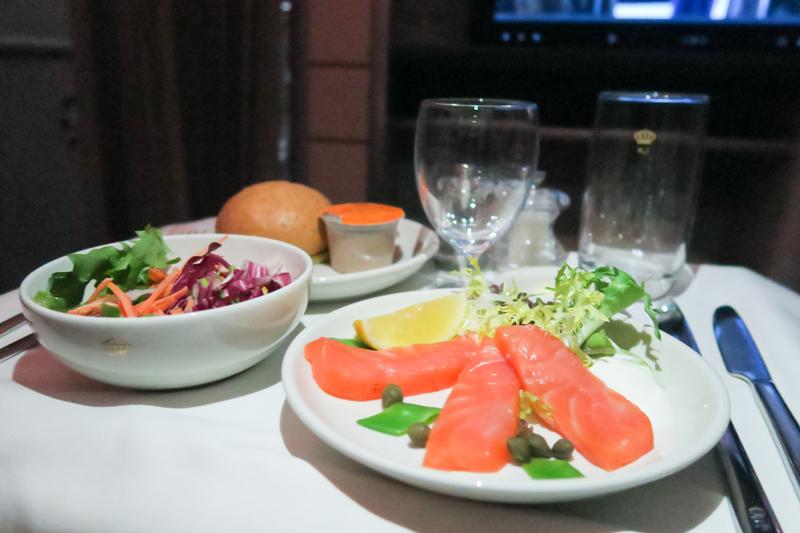 Not too long into the movie and it was time for dinner. I was already giddy just thinking about it! We started with some smoked salmon, a mixed salad and a bread roll with cheese. I had to go for another glass of wine which paired well with the food. Overall, this course was very tasty, especially the salmon. The feeling of being taken care of while you’re eating and watching a good movie is great. I felt like royalty on Royal Jordanian Airlines. Wink. 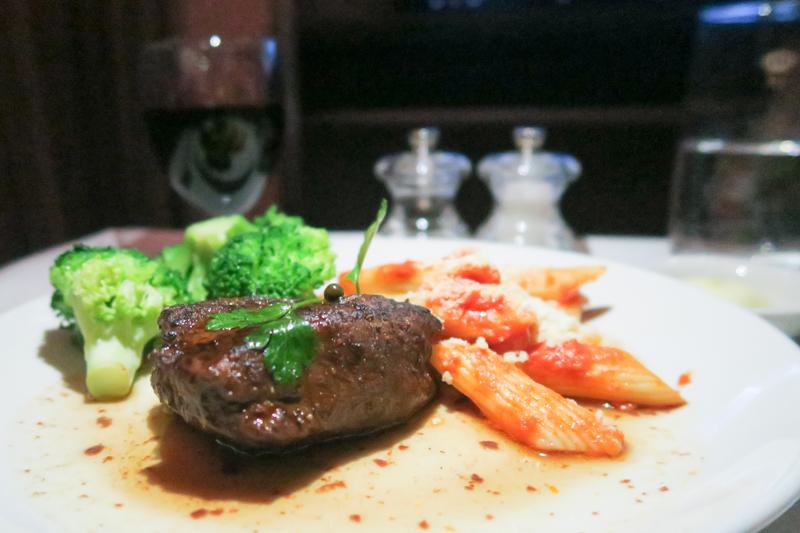 While I was looking through the menu I noticed all of the choices of entrées. When it was time for food to be served I assumed that we would order a single dishe that we preferred. However, what happened was that they brought out all of them and we were able to choose whatever we wanted! I went with the beef, some pasta and vegetables to round it all out. It all paired quite well with the wine and the movie! 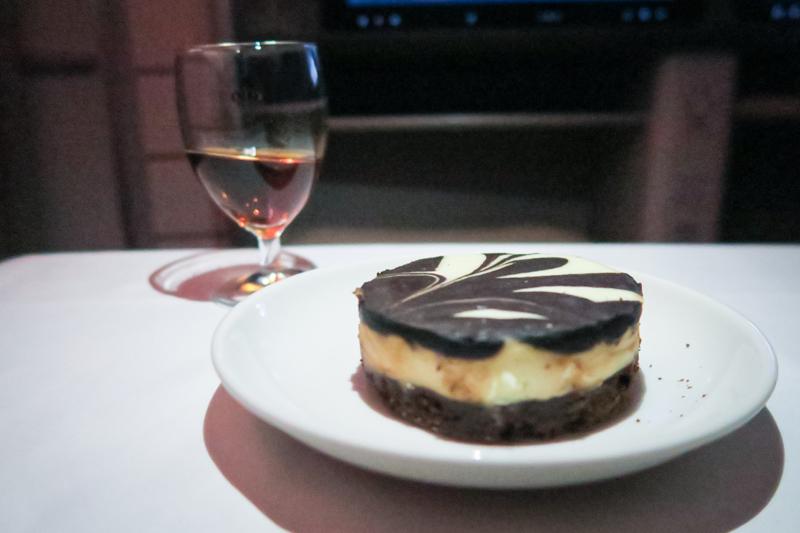 The main event was soon over and it was time for dessert. They had different cakes including a cheesecake which I ordered and made it complete with some cognac. Super tasty and it put me right to sleep. I slept for a solid 6 to 7 hours and when I awoke there were only a few hours left to go until we reached our destination! Seriously, one if the smoothest flights of my life! 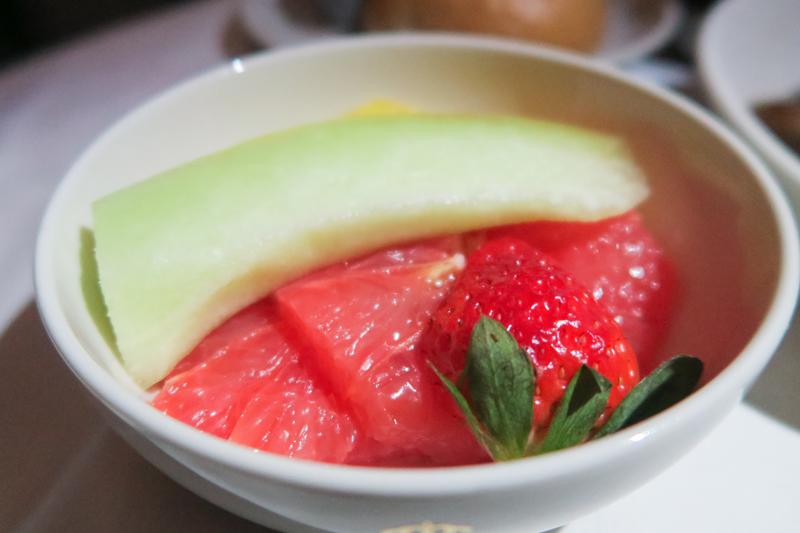 All that sleep worked up quite the appetite. It was not long and breakfast was on its way. It was my choice of pancakes or a cheese omelette. I went with the omelette which came with hash browns, mushrooms, fruit, bread and of course coffee. Breakfast didn’t reinvent the wheel but it was solid and I enjoyed it. I have to say that at this point my anticipation was building to explore Jordan! Within a couple hours we landed and I was whisked off to the Dead Sea! 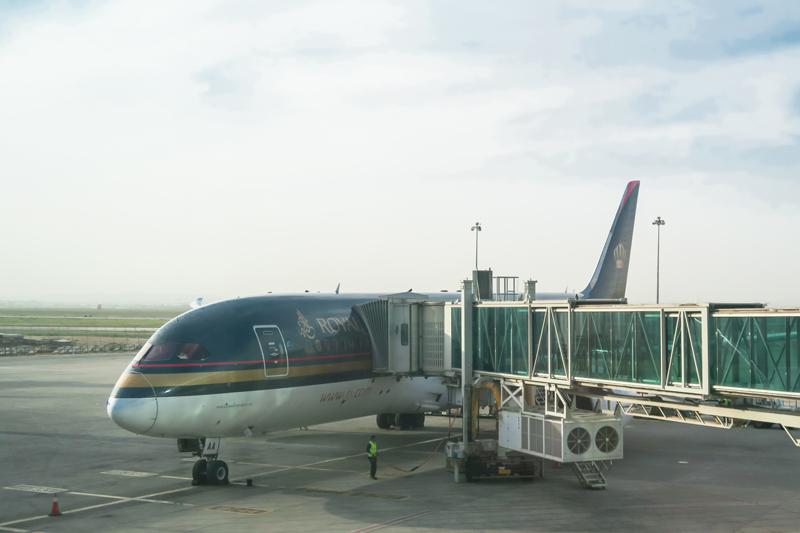 This was my first experience with Royal Jordanian Airlines and my conclusion is that they are fantastic. The whole experience was done right and their standards were up to par with what I would expect from a high-end airline. The service was phenomenal. I would definitely not hesitate to fly with Royal Jordanian Airlines again and would encourage you to do the same! Happy travels!

Click HERE to get the best deal for your Royal Jordanian flight!