I have been in Mexico City for a couple weeks and had already completed a few food tours. They were all lovely but I was seeking a much deeper dive into the local food scene. Luckily I came across Bondabu, which is a tour company that does just that. I joined their Street Foodie Journey which starts in the biggest market in the city and continues on into the historic downtown. None of the other tours I joined did such a deep dive into this part of the city. This was the real Mexico City! 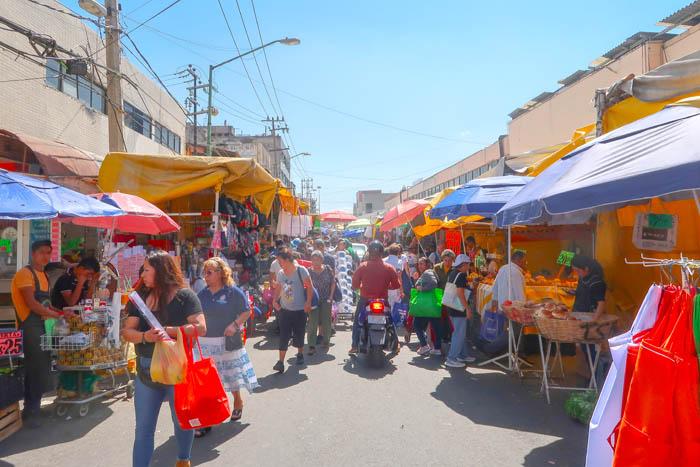 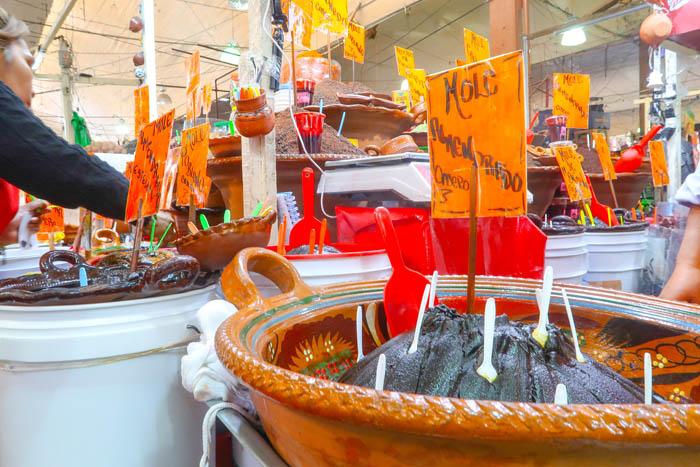 As soon as we stepped foot in La Merced Market, my head exploded. This was exactly the place that I wanted to visit. Everything you could possibly imagine was for sale including the cheapest avocados ever, costing only $.50 USD for 3 to 4. Our first tasting stop was to sample several types of mole paste. If you’re unfamiliar, mole is basically a Mexican curry paste. It’s created by cooking down a bunch of ingredients such as fruit, chocolate, chili pepper, nuts, black pepper, cinnamon, and cumin into a thick dense paste. Customers can then buy the paste, add water, and it becomes a sauce that is usually served with rice and chicken. 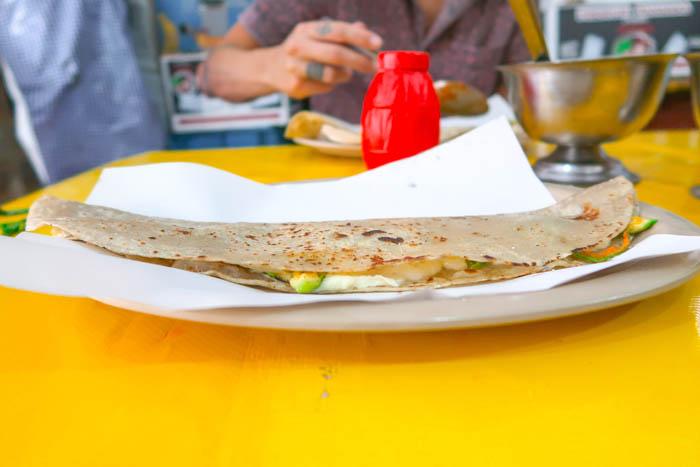 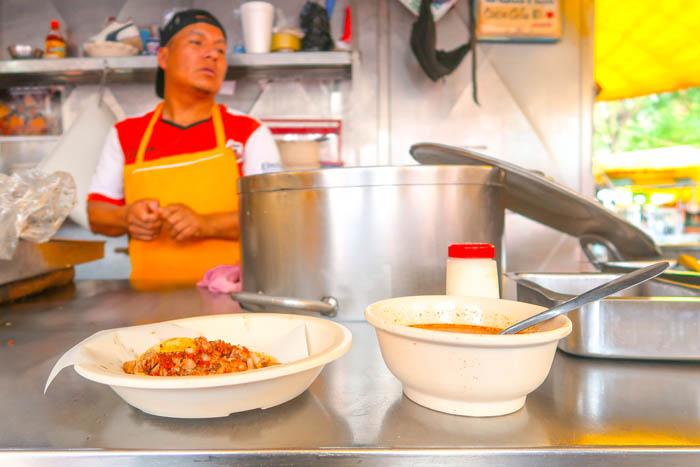 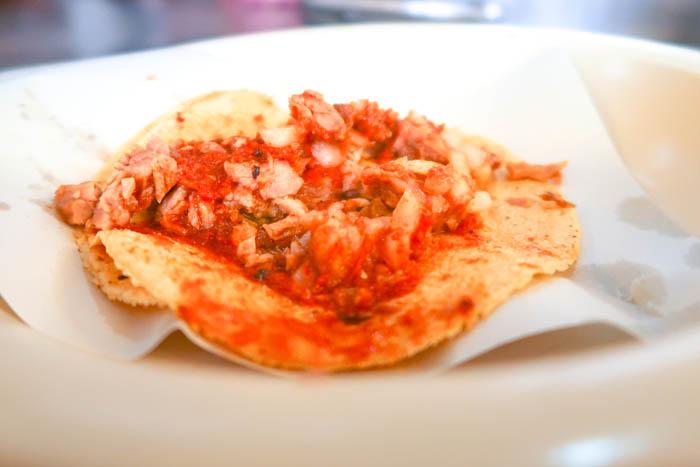 We then continued to make our way around the market, eventually stopping to get a quesadilla and then later a taco at a nearby street cart. This felt very local. Winding through the lanes of the market was very interesting, especially if you’re unfamiliar with these types of vast markets. 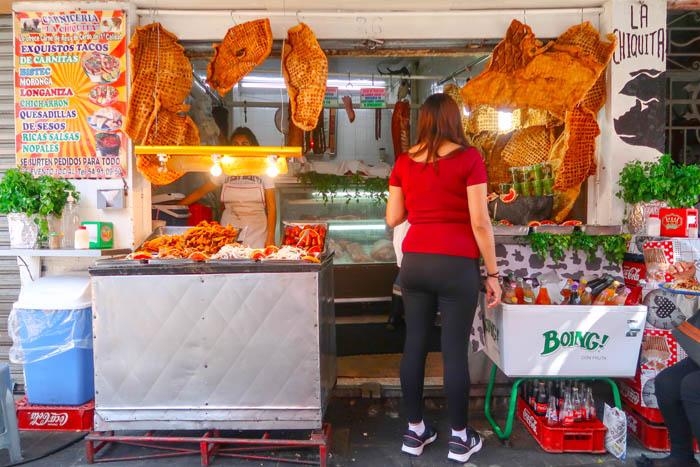 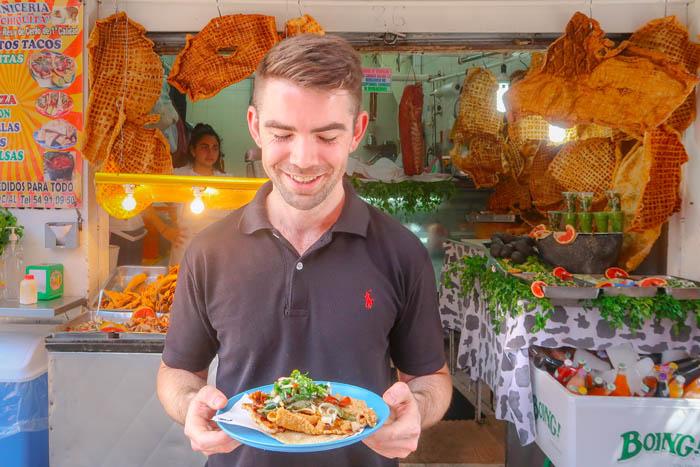 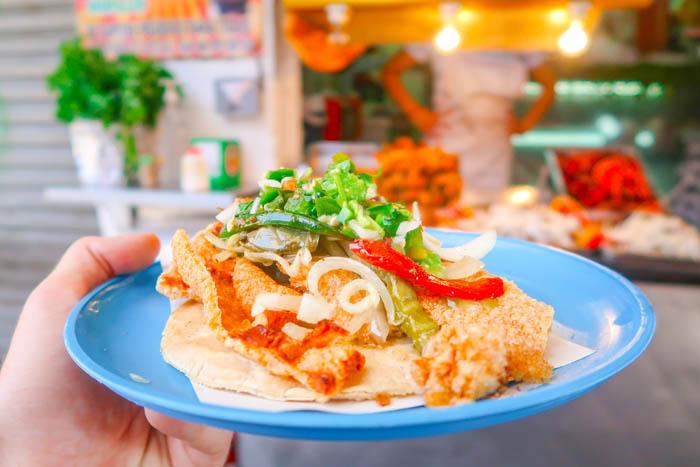 We finally made our way outside of the market and onto the historic streets of Mexico City’s center. These were also bursting with life and had a whole different feel than the more crowded market. There were tons of opportunities to do even more shopping, but our focus was food. After walking for a while and learning about some of Mexico City’s history, we stopped for more food, this time for Chicharrón tacos. Chicharrón is pork skin fried to a delightfully brown crisp. My recommendation would be to add as much toppings as possible because the Chicharrón is a bit dry on its own. 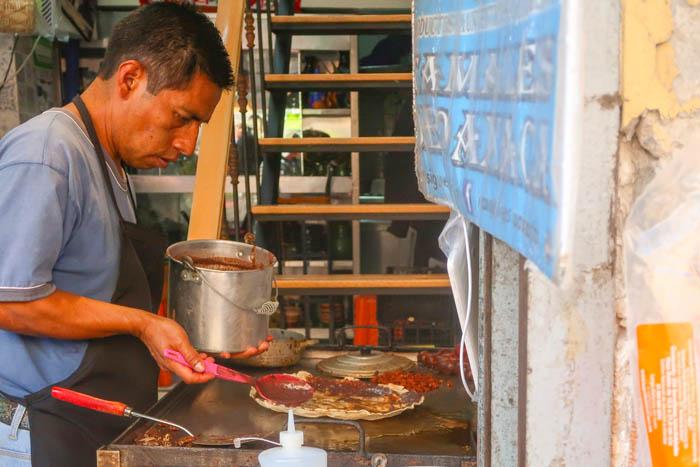 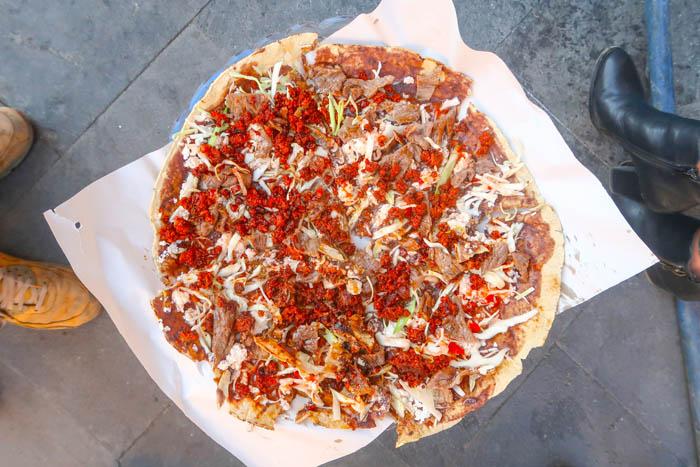 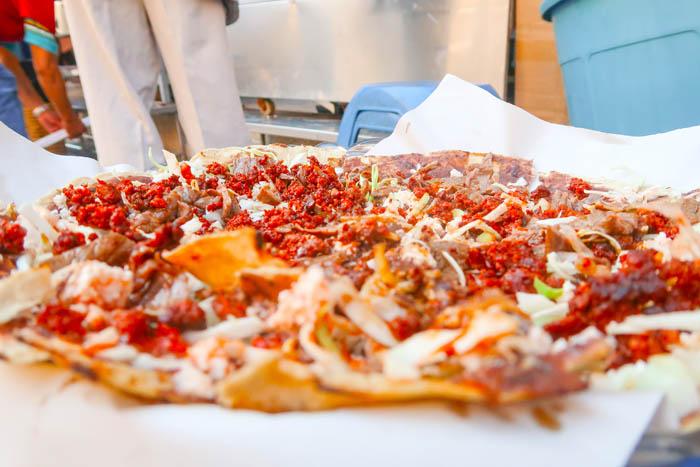 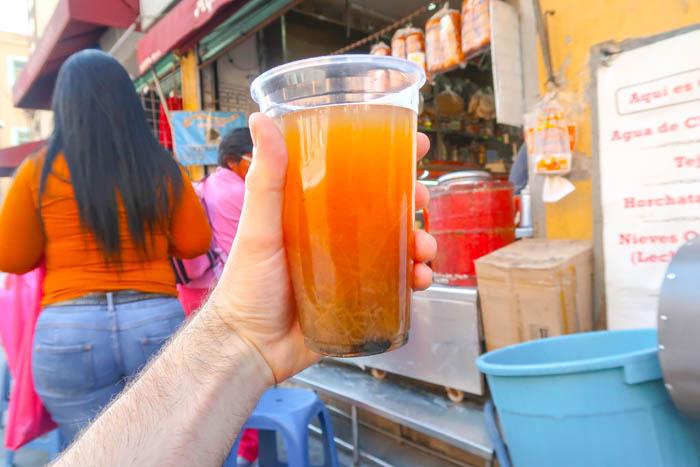 Before I knew it, we were once again on the move and eventually stopping for a pumpkin-based drink and a dish I can only describe as a Mexican pizza. I was excited because these were two things that I had never tried before. The pumpkin juice was my favorite, and very sweet in typical Mexican fashion. 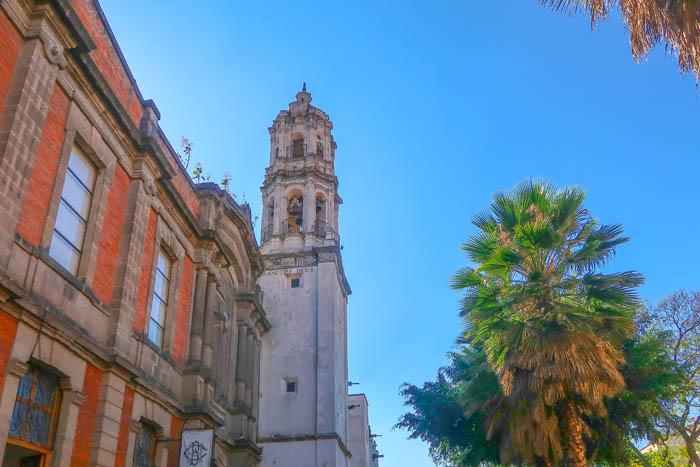 I really appreciated walking down all these glorious streets! 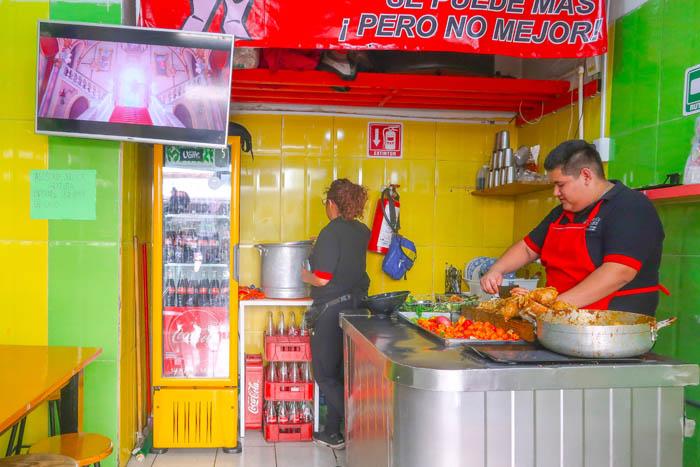 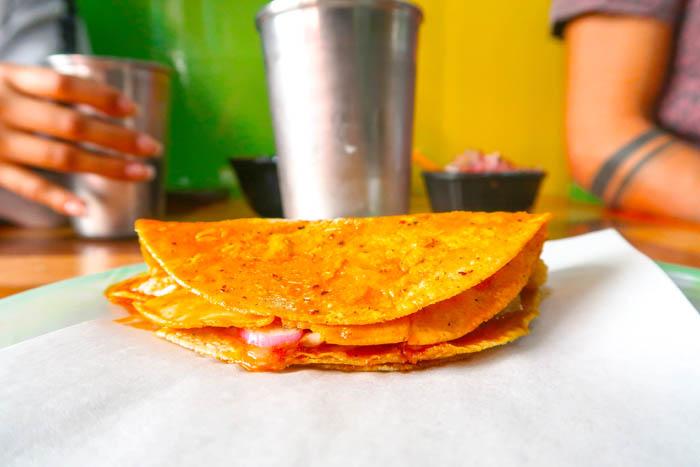 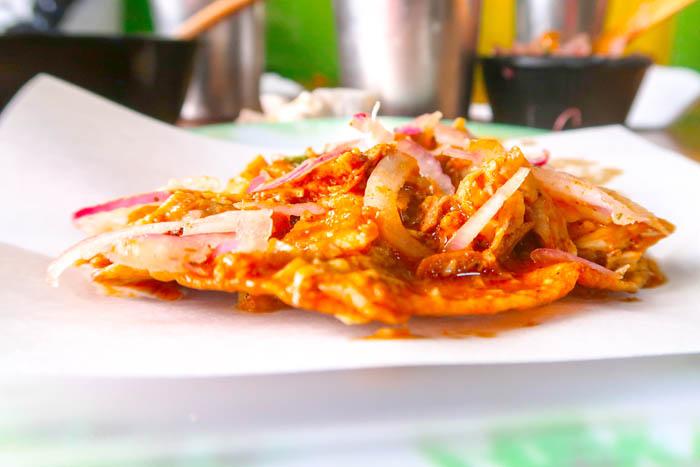 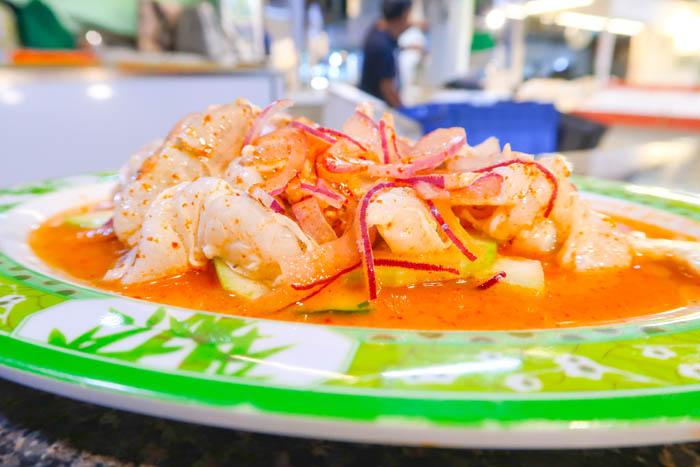 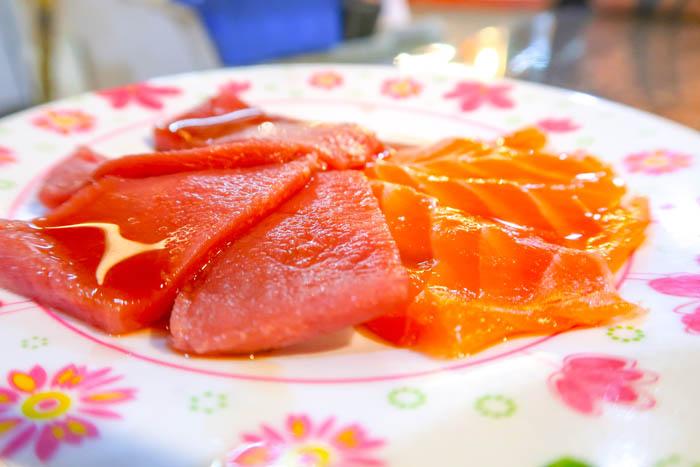 To finish up the tour, there were two more stops, another taco and then the seafood market. Unfortunately, these last two stops were quite far from the previous and took a lot of effort to get to. An included taxi or Uber would have been a great touch. The taco was decent but what was extra tasty was the Aguachile from the fish market, which originated in the Sinaloa region of the country. This is a dish that includes raw shrimp that are marinated in citrus and spices. Basically a more intense ceviche! I also got to sample some Mexican sashimi. This was an incredible way to finish the tour! 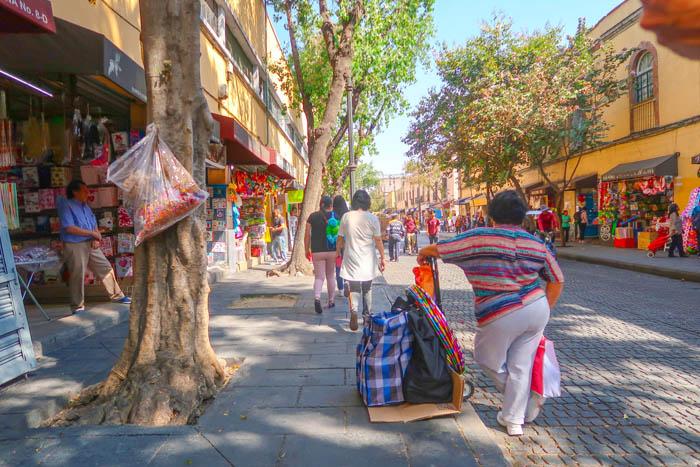 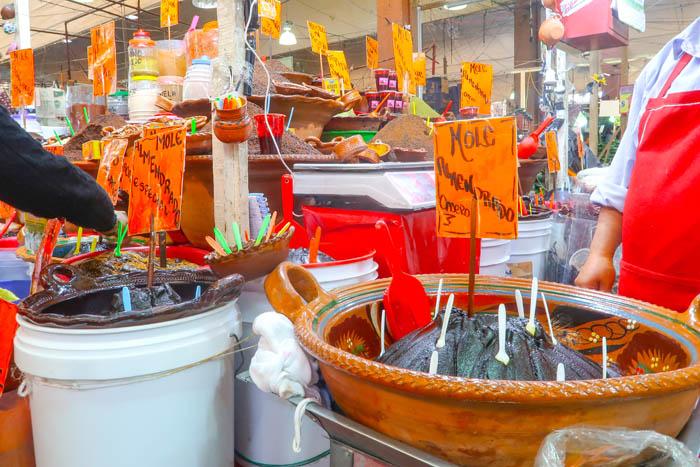