I’ll start by saying I’m a huge fan of ramen. I know some of you are thinking of instant noodles but you are sadly mistaken if you have no idea what the original Japanese ramen is. Get your act together. If you’re familiar with the blog you’ve seen my article about the Top 4 Ramen in Bangkok and I’m sure you loved it. Wink.

Now, as you know, I visited the motherland of ramen aka Japan. Some say I was there because I had to leave Korea for my visa but in all actuality I was sent on a secret mission by the US government to eat and review the best ramen I could find in Fukuoka. All of our lives depended on it.

I was there a total of five days and within that five days I was able to sample five different ramens. This shows how dedicated I am! I know there are more ramen to sample in the city. However, these were the highly recommended spots and I felt that they gave me a good view of what the city has to offer in the noodle department. Out of the five there were some that I shockingly wasn’t a big fan of. I won’t name names but one in particular that’s very popular which is just not that good and it won’t be making the list.

What I like to do is list the ones that I enjoyed the most so you can also share all of my love and happiness the next time you’re in Fukuoka, Japan. Just listen to me I’m the professional here! Without further ado, I give to you Fukuoka’s Best Ramen. 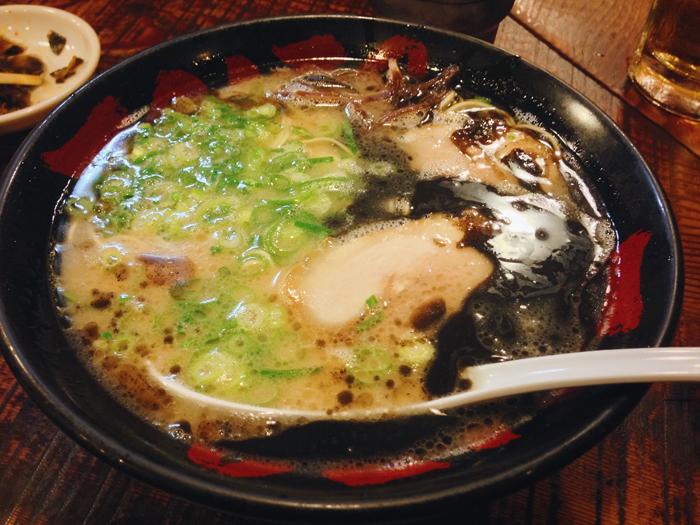 Between the first and second position was a deadly battle. Both were strong contenders but there can only be one champion. At the end of the day, it came down to Pierre’s personal preference.

This was the first time I’ve ever had black oil in my ramen that looked like an oil spill in the ocean. I was eating an oil spill of deliciousness. All of the ramen in Fukuoka had one thing in common which was a dense broth made-up of animal products (mostly pork based,) oils and seasonings. It’s hard to explain but the soup was really thick and you can tell that just the broth had lots and lots of calories. No Campbell’s chicken soup broth here!

The Japanese take so much care and consideration in making the broth. It’s really nice to take the time and appreciate the differences between each and every ramen. In other countries outside of Japan I’ve never tasted this level of high precision along with obvious high love in a soup broth. 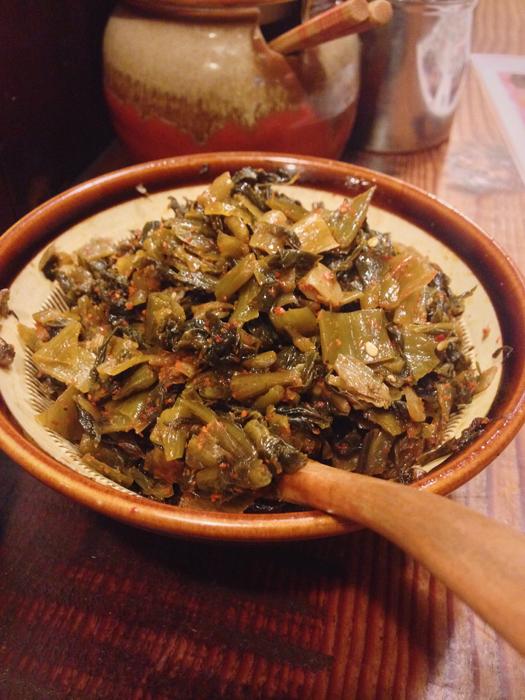 This one in particular was my favorite because the broth was absolutely delicious and they had spicy mustard greens (辛子高菜) on the side to add to it. We all know that Pierre loves his spicy food so adding a little spice to ramen makes him a very happy boy. Only this one and number three had this special spiciness to add an it was magnificent addition.

First and second place are very different so it’s hard to compare them directly but each are absolutely amazing. However, there can only be one boss and that’s why I chose this one. 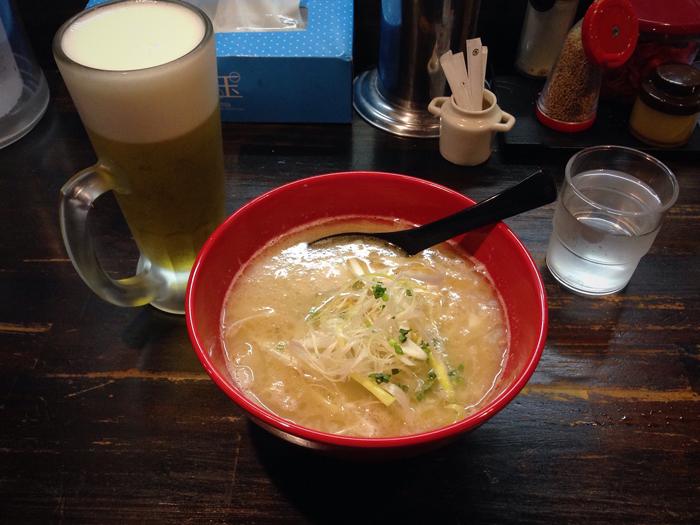 Number two as I said is definitely tied for top position. It was the first ramen that I tried in Fukuoka and my first impression was that of astonishment. After entering the tiny little restaurant which was probably about 20 m² I noticed a huge pot cooking in the background. It was a giant barrel sized pot full of animal parts cooking down to make one of the most exquisite ramen broths I’ve ever tasted. My first taste of it put me straight into heaven. The broth of the gods.

Apparently, this restaurant has a few locations around Fukuoka but it’s still quite a small business and not a major operation. It really feels like it to and that’s one of the reasons I really liked it because it feels very homelike and warm. It’s off the beaten path too so you have to do your research to find this location.

Pierre highly recommends this one. This is more your traditional full of flavor ramen that’s not spicy but just packed with flavor. Combine this with the beer which you have to drink while eating ramen in general and you’re on a one-way ticket to fairyland. 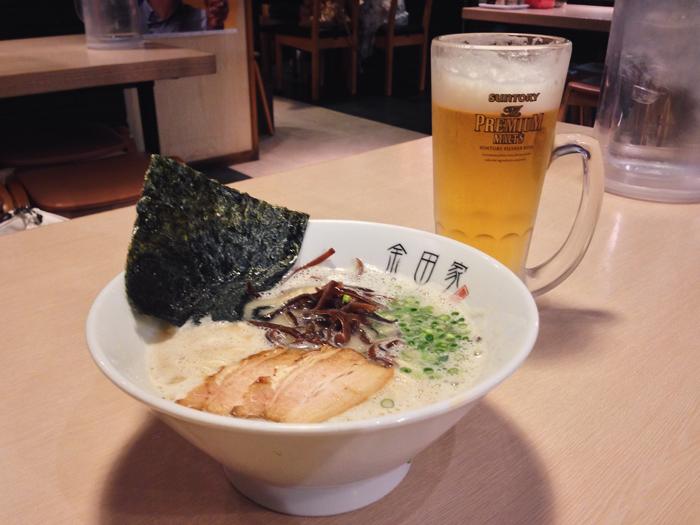 In my craziest dreams I never thought that I would find one of my favorites in a mall. But hey, it happened and I’m not ashamed. Number three is definitely a chain but they are popular because they are doing something right. I walked into the ramen stadium which had about five or six different ramen restaurants not knowing my ass from my elbow. After asking an employee in secret which one is the best he pointed to this one even though he worked at a competitor!

As I said earlier this one also had the spicy mustard greens to add so I dumped it in! This is what dreams are made of people. I didn’t notice until after but almost every place I went had a different Japanese beer. It was nice to sample different beers with the different ramen and get my buzz on!

Side Note: The beer and ramen combination will go down in history as one of my favorite combinations of food ever!

Now this did not have the wow factor of the first two but overall it had a nice balance of quality, taste and price. Overall, it was very good and I was not disappointed. 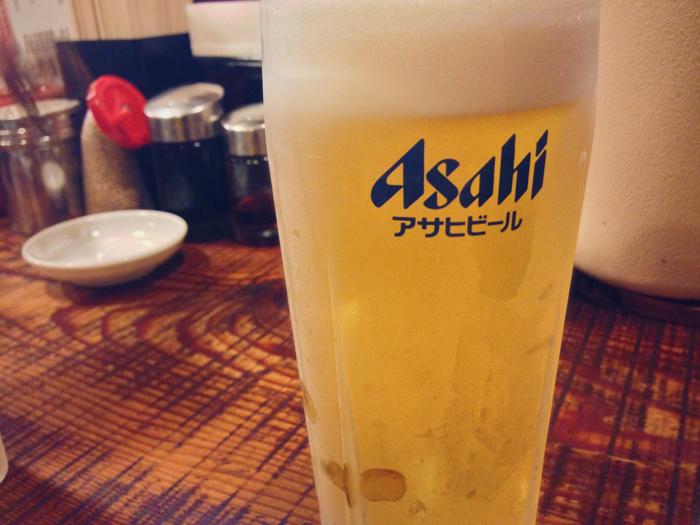 Pierre came, he saw and he conquered the ramen of Fukuoka, Japan. It was a tough battle between number one and number two but someone had to decide once and for all which one is number one. It was a great mission and I hope to continue my exploration of ramen in all nooks and crannies of the entire country. I can’t guarantee it will be soon but keep an eye out for reviews of many many many more ramen spots in the future. The final goal is to put together a full comprehensive list of Japan’s top ramen. Just thinking about it gets me all excited and makes me drool a little. Until next time folks, eat your ramen and drink your beer!